Hybrid PVP’s manufacturers focus on maximum efficiency in using and storing the output power. However, system for easy monitoring of a particular energy flow has been rather neglected. We have added support for two major hybrid system in our Solar Monitor system and we have tested it for you.

In their beginings, PV plants used on-grid inverters, whose output depended on connection to the distribution system (DS). On the other hand, off-grid inverters are independent on the DS. And combined solution uses contactor in order to disconnect from the DS when inverter’s production runs on battery. Hybrid system means that power can be tranferred both ways as current situation requires.

Smaller system usually includes only one device, while larger systems include numerous components as MP trackers, inverters and batteries. There is a variety of sources, recquired output or battery voltage. Very important factor is smart charging and discharging of the battery as its cost is a substantial part of total price. Premature battery destruction caused by wrong control of charging cycles can significantly postpone investment payback period. 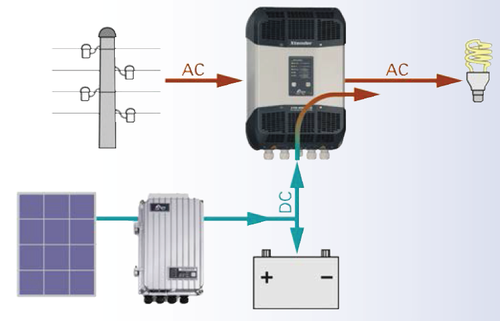 Such a system is complex and it is difficult to be continuously aware of each factor. E.g. right charging and dicharging battery and its suitable size is a key factor. Premature battery destruction can significantly postpone investment payback period, therefore it is better to prevent it. Solar Monitor data can be further processed, e.g. by programmable logic controller Foxtrot by TECO a.s. I would like to point out several cases of long term hybrid system observation by Solar Monitor system.

When we click on a day in circle, we get daily detailed graph. It show consumption between 11 and 12 o’clock. It was too high to be covered by current production or battery and we had to purchase the power. Gradually the power production increased (green bar), battery charged (blue bar) and it was sufficient for covering the consumption.

In an ideal case the consumption is linked to the production tightly. Key factor is suitable design of optimum consumption. Although production is sufficient to cover consumption, the system consumes about 10% energy from the grid (red bar) in order to prevent possible leakages into DS.

If the battery capacity is sufficient, it can cover permanent consumption on condition that daily production has been sufficient.

After a few worse days the battery has been discharged and power production has been low. The battery hasn’t started charging until 2pm. It means that either battery has low capacity or consumption hasn’t been optimal.

In the next graph we can see that optimum consumption with night electric power was mostly covered by battery. At first totally, later on the blue bar dropped and purchasing the power was necessary.

Everything is available for Android mobile application. 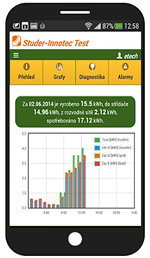 Hybrid system has Boost mode available. It can provide power both from the grid and the battery at the same time. It is an ideal solution for smaller factories as they don’t have to pay constatnt high charges because of occassional high consumption.